Ohhhhh, what now? we have a screen notch on this one too. Lets not be too dramatic here, well we at safigeek were just excited about the google pixel 3. Well we gotta admit its worth the excitement, google does not disappoint on this one though.

We do expect it to launch on  October 9, 2018, so here we are just looking into the future of how things will be with this phone. Disclaimer: most of the info we have or you will find anywhere so far on this phone , is from leaked sources. Don’t worry most of the info is most likely 99% true, 95%, 85%,75%. Just kidding, heheh, got you there, right? You can trust to get a complete image of the specs by the end of this article.

Lets start with the screen, its a 6.7″, P-OLED capacitive touchscreen, 1440 x 2960 pixel resolution, 491 ppi Corning Gorilla Glass 5 screen. Gosh I love the order of adjectives, this ain’t an English class though. Simply put, the screen is gorgeous. Expect to have really sharp images and good color. I learnt the P in P-OLED stands for plastic, got lost when they started talking about polymers and stuff. You get the idea, its some awesome screen, especially looking at the resolutions and pixel density. 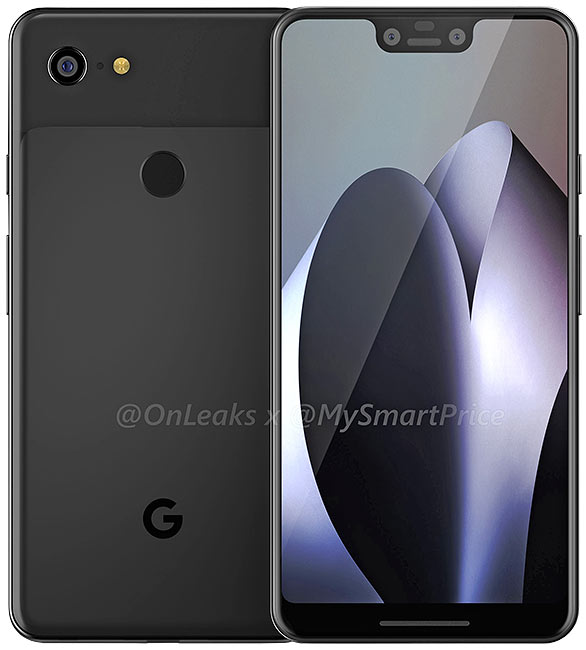 The notch at the top of the screen looks cool but a little too deep i’ld say, I don’t know about you but I think the one on iphone X looks a little bit better. Not to say that they just made the notch deep for no reason, we actually have a dual front facing camera setup on that notch and a speaker. I do tend to believe there are plans to have some face recognition coming up. We do have a finger print scanner at the back though. So for those of us who are afraid of look a likes hacking into our phones we have a fingerprint scanner for the added security. Would facial recognition really work in china? Let’s leave that for some other post. Comment if you want us to really talk about that.

I have already given you a little bit on the front facing cameras, what most of you will call the selfie cameras. Its a dual setup, yes, with an 8mp 25mm wide angle camera and another still 8mp deep sensor camera, Looks like we have some 3D image processing going on.

The rear camera is also real stunning, its a 12 mp wide angle camera. Yes its a single camera, no duals on this one, say goodbye to the optical zoom on this one. The camera can shot up to 2160p (4k) @30/60fps, impressive uhh? It also boasts the normal features we expect, HDR, panorama and a dual led flash.

Its from google, its wise to expect the latest android version on this one. Android 9 famously known as Pie, sweet , right? We will have all the latest features android has to offer and best of all its the stock android, so no bloatware on this one. From experience we know this really offers some great user experience.

For the cpu we have a Qualcomm SDM845 Snapdragon 845 octa core processor. The ram boasts at 6gig and an adreno 630 gpu. Thats powerful. I can bet on better ram management from this one so, tasks are going to be really fast on this one.

We have no sd card slot on this one, but you have a choice of a 64gig or 128gig memory space. uurrgg! what do these people have against sd cards, well I believe that will be my homework for the next article maybe. We still don’t see the headphone jack ever coming back, get used to the wireless stuff now. I don’t really like the fact that we have no headphone jack though, Maybe am old school, but i still want the wires on my headphones.

The battery may be impressive, we have to find out though, its a 3430 mAh battery. The best news could be that the phone may have wireless charging features. 3430 with good power management could last you a full day though.

That’s it for now, keep on the look, leave your comments, don’t forget to follow us @safigeek :).

Cloud computing; All you need to know.

Best phones in Kenya and their prices